This is a game about running an orphanage during war time. Have fun!

Known issues:
- Balance
- The tutorial is super duper long.
- A bit riddicolus ending screens. Lack of sleep will do that to you ;D

This game became a quite a bit more complicated than we expected, but we still managed to end up with something, so enjoy!

So I played this game for 8760 days. I hoped the game would have a real end (a good end), but that's not the case. The game itself is really great, I enjoyed it a lot, but it's clearly missing an ending. Like I really hoped that at some point the newspaper would say, that the war is over. But it seems like the last newspaper articles appear on day 281 ("More medicine being demanded on the front, increases price domestically - price of medicine increased to 20 $) and day 382 ("War rages on, government calls out to citizens for more support"). After that no newspaper appears until day 8760. After day 8760 I just got so bored that I stopped playing. I was really disappointed that there was no real ending, an ending where a newspaper article would say something like: "The war has ended. Peace has returned" or something like that. An interesting feature would be, if the military would just continue demanding more and more until it's impossible to fulfill their requests and your orphanage gets shut down for good.

This game actually made me sad. I ended up being forced to send them to the mines just to buy food and still got shut down. Very sad game. Great job!

i really want to play this, cannot tho... cant play it on this screen.. just a picture of the game... and nowhere to download it at... hmmm, sucks. i will put this in my keep an eye on folder... and will come back from time to time... but i see two others who said the same thing about a year ago... is not looking so good for me!

Needs a download. Seems interesting but it won't run in my browser.

Not just that the narrative itself is depressing, it also hurt a bit to play it, because one had to think efficiently in there - sacrifices had to be make to progress. Congratulations to the 30th place in the Ludum Dare 34 with such an atmospherical 'resource management' game, that's quite a rarity. :) Gladly I recommended your game in a little article and also uploaded a quick gameplay video. <3 Looking forward to future projects of you!

Even though it was very depressing to play. I really enjoyed playing this game.

I'm playing this game for my channel and it's hitting viewers pretty deep. I'm loving it though, I see you got more interesting games like this on your website. :) Hope you all get the media coverage you deserve for this and keep making more. I tried to give feedback, so here's the link: 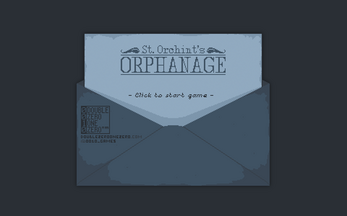 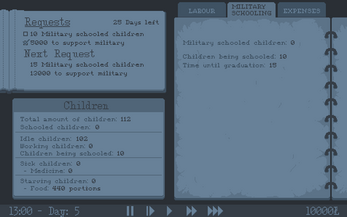 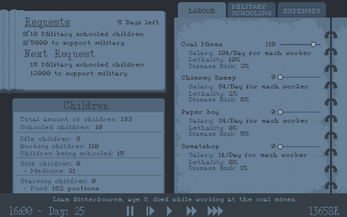 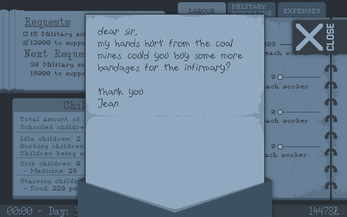 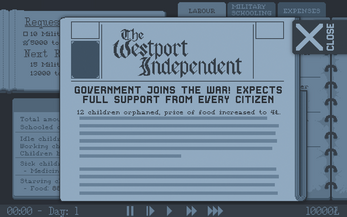